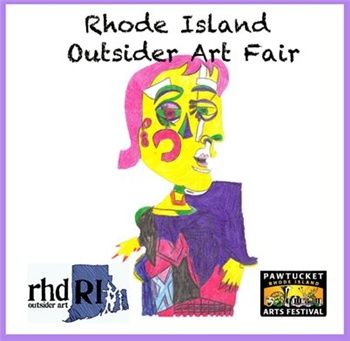 For the first time ever, a majority of Rhode Island’s premiere programs for artists with disabilities will be joining forces to present their work and wares at the same time, in the same place! Several of the North East’s most renowned art centers and galleries will also be exhibiting at this event-which is the first of its kind in Rhode Island!

Vendors included will be: RHD-RI Outsider Art and Flying Shuttles Studio, both from Pawtucket, Top Drawer from Warren and Jamestown’s Bridges. Boston’s Outside the Lines, Maine’s Spindleworks Art Center and famed curator Margaret Bodell, NYC, willalso be in attendance.

This event will showcase the work of a wide ranging neuro diverse and uniquely abled group of nationally and internationally shown and recognized artists who have been featured at such prestigious events as the INTUIT Art Fair in Chicago, the St. Louis Outsider Art Fair, the New York Outsider Art Fair and the Museum of Everything.

So-called outsider art is defined as art produced by self-taught artists outside the boundaries of the established art world and its corresponding institutions. The work featured at the fair will include examples of new folk, pop and Americana, neo-surrealism and visionary art, all of which fall under the general umbrella of “Outsider Art.”